April 2, 2022- LaFollette, TN–The 2022 Morristown Marine Team Trail made stop number 3 Saturday with 253 registered boats on Norris Lake. Of the 253 registrants, we had 238 boats in the water that went through blast-off. It was a cold start with temps around 30 at blast off and a warm, blue-bird sky all afternoon. The fishing should have been phenomenal, but the old Tennessee spring cold front gave the bass in Norris Lake lock jaw. Everyone we spoke to had struggled to put a reliable pattern together through the week. Good fish were hard to come by, but the smaller fish seemed catchable for most. There were a lot of 10-12 lb bags brought to the scales. In all, 71 teams weighed  5-fish limit and 136 teams weighed at least one fish. A grand total of 1,198.0 lbs of bass hit the scales yesterday. 553 bass were caught, weighed and released alive back into Norris Lake. Total payout was just over $50,000.00 across all contingencies and 42 places with a cut weight 10.62 lbs.

The team of Curtis Gwin and BJ Henderson topped the field with a solid bag of fish weighing 16.60 lbs. Curtis and BJ said they stayed close by the boat ramp and were able to pick up scattered good fish on a variety of baits. Check out the FaceBook Live interview with them on our FaceBook page where they gave us a few more details of their day. Curtis and BJ’s win netted them a grand total of $13,250.00. This included 1st place, Highest Finishing Skeeter, and 1st Gray Fox Payout. Congratulations to Curtis and BJ on a great day on the water.

Second place went to the team of Jacob Barton and Seth Barton with 15.88 lbs. Jacob and Seth also won 1st Humminbird/MinnKota Payout for a total of $5,250.00 for their day of fishing! Congrats guys!

3rd Place went to Riley Faulkner and Ben Arnold with a very close finish at 15.82 lbs.Riley and Ben will cash a check for $3,000.00 for their efforts. Way to go, Riley and Ben!

4th place belongs to Mark Ownby and Wandell Lusk with a 15.01 lb bag. Mark and Wandell also cashed in on 2nd Highest Finishing Skeeter and 2nd Humminbird/MinnKota Payout for a total of $3,650.00. Great job, guys!

Rounding out the top 5 was a very close Neil Hunwick and Don Southern with 15.00 lbs. Neil and Don will draw a check worth $1,500.00 for their efforts on Norris. Congrats and thanks for coming out to fish with us!

The Citizens Bank Big Largemouth went to the team of Travis Wormsley and John Carroll Sr with a green fish weighing 5.87 lbs. The catch netted them a check for $1,2.00. Congrats on a stud Norris Largemouth!!

The Citizens Bank Big Smallmouth was caught by Chad Ball and Nick Coker and weighed in at 3.71 lbs. That fish got them paid  $1,215.00. Congrats Chad and Nick!

Morristown Marine would also like to thank Yamaha, Skeeter Boats, Humminbird and MinnKota, Citizens Bank, Rainey Battery, Gray Fox Insurance Agency, Old Stage Printing, Volunteer Trenching, ValuRX Pharmacy, Taylor Plumbing, Cumberland Gap Spring Water, Ridge Real Estate, Lake View Dock, Chris Watson Photography, and Smokey Mountain Fiberglass. Without the support of our sponsors, this tournament trail could not exist. Please help show your thanks by supporting these businesses. A big thanks to Jay Munsey and the Lonas Young Park staff for all their help and support with traffic and parking. Another big thank you to the Campbell County Sheriff’s department for traffic control on the highway. We also would like to thank the Campbell County Fire Department for filling up the weigh tanks to help keep the fish alive and well. Our trail, the anglers and the fish caught appreciate your efforts to ensure the livelihood of the fish we weighed.

We would also like to thank our entire tournament trail staff for their long hours and hard work to bring this whole thing together. Most importantly, we want to thank the anglers for coming out to fish with us, being great sportsmen and stewards of the sport of bass fishing.

We compiled some statistics from this tournament we wanted to share that prove our anglers a tournament staff are truly some of the best in the nation. We had 253 registered boats, with 238 in the water at blast off. Thanks to the system we have in place and the knowledge and experience of our anglers, all 238 boats were safely blasted off in a total of 48 minutes. That’s an average of 4.95 boats per minute. The quicker and smoother we can make blast off, the faster you guys can get your fishing day started. So, a BIG Thank You to all of our staff and anglers for accomplishing this huge feat! Secondly, we weighed in 136 bags of fish across 5 flights in a total of 115 minutes (1 hour, 45 minutes) from scales-open to scales-closed. That equates to an average of 1.29 bags weighed per minute! Again, that’s a HUGE credit to our staff AND the anglers bringing fish up to the scales. The faster we can get your fish weighed, the sooner you can get home to your families. Thank you, to everyone involved for making this process so smooth and fast. We had asked that if you wanted to weigh a big fish to leave a cull tag in that fish to help speed up the process. That worked really well, so we will be asking that from here forward, if you choose to weigh a Largemouth or Smallmouth for Big Fish, please leave a cull tag in that fish so we can identify which fish you want to weigh and get it weighed first. Thanks!

We have secured a room rate and block of rooms at the Holiday Inn Express in Rockwood. Be sure to call and reserve your room. Let them know you are part of the Morristown Marine Team Trail.

We ask that you take about 30 seconds to complete the Economic Impact Survey: https://bit.ly/NorrisEconImpact 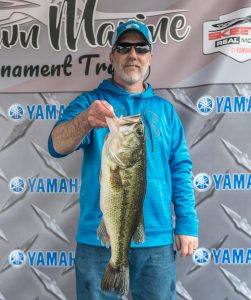 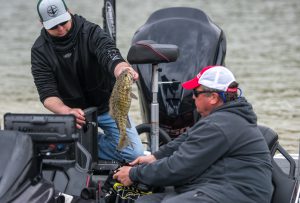